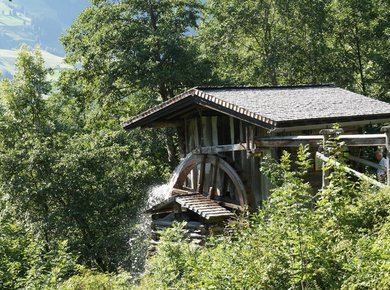 A visit to both of these mills is definitely rewarding, not least because it is so rare to find these two different designs located so close together.


Today, we can barely imagine how important the 143 watermills used to be for the people in Gastein. Until the 1960s, their heavy paddle wheels, turned by water from passing streams, are what made it possible to produce precious flour. But then they fell silent.

A leisurely hike along the Gasteiner Höhenweg in Bad Hofgastein to the Rauchberg and Bocksberg mills is like taking a walk back into the past of how people once lived and worked in the mountains, also demonstrating impressively how much skill was required in order to operate these cumbersome mills made of wood and stone.

The Rauchbergmühle is a so-called overshot mill. First chronicled back in 1728, it was operated until 1965 and still remains in fully functional condition. Close by, a furnace at the Rauchberggut, which dates back to the 18th century and was actually demolished in 2008, has also been rebuilt.

For its part, the Bocksbergmühle, which features a different mechanism with a horizontal waterwheel, stopped running commercially in 1941. It, too, has been painstakingly restored by a large number of volunteers and can now be visited as part of a fascinating tour. In contrast to the more complex overshot mill, this one needs a lot more water for it to run properly.