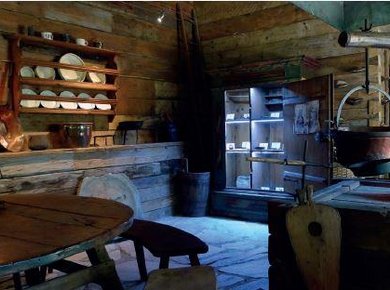 The hike from the car park at the entrance to Angertal to the mining museum takes about one hour and is like a journey into the past of Gastein Valley.


To a time that was hard and filled with deprivations, a time that pushed the miners of precious metals to the very limits of their strength and endurance. And unfortunately, even far beyond. In an original historic location, Miners’ World documents those days, providing visitors with compelling insights into the history of gold and silver mining.
Angertal, one of the most beautiful side valleys in Gastein and roughly at the same elevation as Bad Hofgastein, was well known even in the Middle Ages for its rich gold and silver deposits. Mining began here very early in the region’s history. One unique aspect of the mining activities here, was that the ore was processed practically in the same place it was found. This occurred in a total of seven smelters which archaeologists were able to discover, and which have been dated to between 1490 and 1530.
Because of the tremendous boom in the mining industry back in those times, more and more people began working for the mines in the hope of ‘striking it rich’ for themselves. A tough, austere and often brief life, even if the miners did enjoy a somewhat privileged status in the valley. They were allowed to carry weapons and able to take advantage of the so-called ‘Bruder-Lade’: essentially a social institution which took care of the miners’ needy family members should they be injured in an accident or even perish in the mine.
So that this chapter in the valley’s history not be forgotten, and to give people an impression of what the world of the pre-industrial miner was like, the mining-history association known as ‘Via Aurea’, together with the market town of Bad Hofgastein, founded Miners’ World. Opened in 2008, guided tours lead you to a forge, a mine barracks, the old smelters and the mine overseer’s house.
Opening Hours